A hybrid solar collector is a combination of a photovoltaic solar panel and a thermal solar collector. The residual heat from the PV solar panel is used to heat water. The water flows through a system of pipes on a copper sheet. A great deal of heat is needed to heat the water in the pipes. That is why the solar collector has been fitted with a transparent cover that helps to retain the heat. Unfortunately, the material used in the PV solar cell degrades quickly under temperatures of around 120 degrees. As a result, its efficiency is reduced by around 20 per cent and it has a lifespan of between five and ten years.

Roest developed a special solar simulator to measure the efficiency of his prototype. Almost immediately, there was commercial interest in this simulator and the relevant technology was quickly patented by TU Delft. Roest and his partner Chokri Mousaoui have since introduced the simulator onto the market via their TU Delft spin-off company Eternal Sun. Eternal Sun recently came out on top in the European finals of the BE.Project competition for students from top universities with an innovative business case, which was organised by the technology consulting company BearingPoint. The Eternal Sun team has now grown to include six students and recent graduates, and five solar simulators have already been sold since January.

In Reno  Apple is working on a new, huge solar panel farm to power its  data center, aiming to pump out up to 20 megawatts of energy with a complex magnifying system that will boost the natural power of the sun by up to seven times.

The solar farm, which Apple will build in partnership with NV Energy, will use magnifying lenses to increase the intensity of the sunlight onto each panel, based on Sun Power  technology; any spare power will be fed into the general grid. 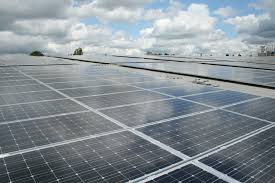 This project will not only supply renewable energy for our data center but also provide clean energy to the local power grid, through a first-of-its-kind partnership with NV Energy” Apple said in a statement on the project. “When completed, the 137 acre solar array will generate approximately 43.5 million kilowatt hours of clean energy, equivalent to taking 6,400 passenger vehicles off the road per year.”

Apple itself will be footing the bill for actually installing the farm of panels, allowing NV Energy to use it to supply other customers without having to increase the rates they pay to offset the build. Meanwhile, the energy company will also have the option to eventually purchase some of the output direct, or even buy the whole facility.

Apple is no stranger to solar power, already using it in North Carolina to power data centers there.   In fact, the company has two North Carolina facilities, each pushing out a similar amount of energy to this proposed Nevada installation.

SunPower – which Apple has already worked with in existing projects – uses a combination of magnification and tracking systems to maximize efficiency. The solar arrays will be able to physically move to follow the changing position of the sun, ensuring the most light hits, while backside mirrors work in a similar way to transflective displays, reflecting light back out through the cells to give them a second chance to convert it to electricity. In fact, SunPower holds the world record for conversion efficiency, at 24-percent.

It’s unclear how long the solar farm build is expected to take, though Apple has said it will rely on geothermal power from an existing facility in the intervening period, so as to maintain its eco-friendly data center record. Also unknown is how much the development is expected to eventually cost Apple in t